Our Vote 2010: City of Calgary Election 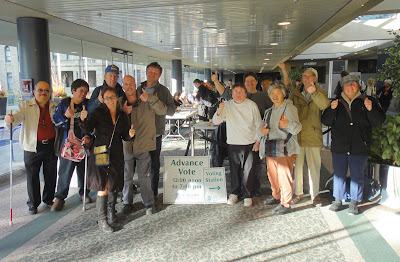 Recently the Disability Action Hall, a group of self-advocates and their allies who work on improving quality of life and living standards for people with disabilities and their communities, evaluated the mayoral candidates in the upcoming Calgary civic election. Their evaluation was based on their vision for healthy individuals, families and communities and the five priorities defined by the group as integral to their needs: the right to gather as citizens, the right to access city services, affordable public transportation, disability culture and the arts, and affordable safe homes for all.

Hall members were disappointed with mayoral candidates' stance on issues impacting people with disabilities. Three quarters of the candidates scored below 15% on the Disability Action Hall’s scale. The group also noted that several candidates with aldermanic experience who claim to support the low income transit options voted against it in council. Another overlooked issue not addressed by mayoral candidates is working with our province on rent control.

The Disability Action Hall believes that for Calgary to be a truly vibrant and sustainable city, it must address the needs of its entire people. It encourages candidates to develop policies and plans that eradicate poverty and promote full citizenship. “I wish people would get off business and talk about poverty,” said member Tom Brisbin. “We don’t know if these people know enough about disabilities. We were really disappointed Kent Hehr dropped out of the race, as he took the time to hear our issues about living in a city with a disability.”

The Disability Action Hall is a group of Calgarians with disabilities and allies who have told their stories, taken action and changed lives since 1998.