We are very excited for the Deaf community can now register their cell phones to access 9-1-1 services.
To learn more, watch this closed captioned video

You can also visit the official page  text with 911 site  for complete information and find out if it is available in your area.

For the ASL version, watch this video


If you would also like to learn more about the violence against disabled women and Deaf Women, visit Disabled Women's Network of Canada (DAWn)  and read this learning article titled "Violence Against Women with DisAbilities and Deaf Women"


Thank you to all the many people who help with this incredible effort!

Living in Canada with a Disability is now a little bit safer.

at March 28, 2014 No comments:
Email ThisBlogThis!Share to TwitterShare to FacebookShare to Pinterest

We went up in solidarity with a collective of community groups to the Edmonton Legislature to defend Section 3 of the Alberta Human Rights Act (a private members Bill, motion 502  asking to remove part of the Act) on March 17th, 2014.

We only caught wind of the motion last Sunday from the Ethno-Cultural Community Council of Calgary. (ECCC)  Many of us quickly wrote  letters, videos and used social media to help raise awareness of the motion. We heard there was a lot of pressure from the Conservative and Official Opposition to repeal the Act. Now it was time to see if our week long effort and being present at the legislature will make a difference. (Links to see ECCC position paper).

Early Monday morning we were warmly greeted with coffee, muffins and smiles from the ECCC and a big white bus! We were a very diverse group of First Nations & Metis, LGBTQ, Women, Ethno-Cultural, Disability Communities and Concerned Citizens who dedicated themselves to witness the voting of Bill 502.

Upon our arrival of the legislature, we were introduced as guests of MLA Teresa Woo-Paw. We also had a brief meeting with her afterwards and just prior to the presentation of the Bill, a quick hello to Deputy Premiere Dave Hancock to express our concerns over the Bill. A smaller group also met with MLA Linda Johnson. Our group grew bigger as people from Edmonton also joined us on both sides of the public gallery.

After 5 hours  of patiently waiting for the debate, the Bill was presented by the Wild Rose Party and we heard many MLAs speak  in favour or against. (For a complete detailed discussion of the debate, please visit the Alberta  Hansard for (March 17th afternoon sessional notes of the 28th Session beginning on page 280).

Perhaps one of the more emotional debates came from Alberta Liberal House Leader Raj Sherman, who described what to was like to grow up in Alberta coming from another country; what it was like in their first week of living in Canada when all his mother's children came home with black eyes and beatings.  And then he said what was the most damaging of all were the names he was called and how these names made him feel shame for the colour of his skin. He went on to speak in support for previous MLAs stating how the criminal justice system was not enough to capture and address the daily activities and events that happen in people's lives because of difference.

When it did come time for the Speaker to call the vote time in favour of the Bill, we heard people say yes in favour, and our hearts sank a little...

And finally, when asked who is not, an overwhelming 'NO' echoed all over the walls of the house. Never has the word 'No' been such music to our ears.

We then saw the MLAs look up at us from both sides of the assembly. They waved and smiled up at us. We were overwhelmed. Democracy at its best.

Thank you to all who made this  a day of hope for many generations of Albertans to come. Enjoy your free speech with the security of knowing your rights are protected for another day.

To learn more about all the collaboration and get in on the conversation, please visit the Hate Speech Hurts Everyone FaceBook Group.
at March 17, 2014 4 comments:
Email ThisBlogThis!Share to TwitterShare to FacebookShare to Pinterest

For all who may have missed the event due to poor weather and the stopping of Access Calgary Services, Check it Out!

For International Day of Disabled Persons, Tuesday December 3rd, Eight talented Albertans and Groups from across the region took on the challenge of speaking about Pride. Each speaker was given 6.40 seconds to share 20 images, in some cases we let the person go longer due to the level of ASL interpretation.

The videos are closed captioned to the best of our ability. We hope you enjoy them as much as we do! 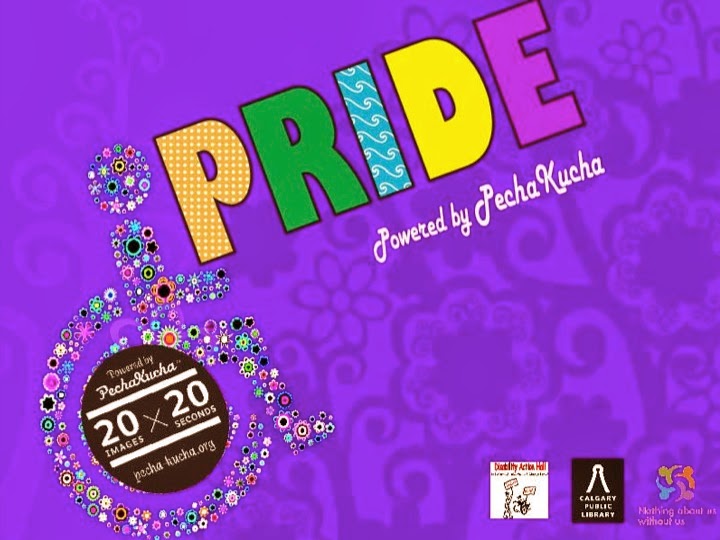