Vote Party and We Vote Actions!

Update on our VOTE PARTY and WE VOTE!

Today, October 19th many Canadians will be casting their vote. We wish everyone good luck!

At the Hall we have done many things to help us with voting. We have learned we have be the best voter turnout when we use the "Vote Anywhere" approach. On October 8th, members of the Disability Action Hall held a Vote Party by special ballot ahead of the advanced polls. At least 10 Hall members voted.

We chose a mall because it was easy to get to, move around  and we could enjoy some food as a group in the food court. It was fun to go to a mall and go with everybody and chat about if people who knew they were going to vote for. Some people voted, some did not. To help people who were undecided we also participated in a "We Vote" action, which we will talk about a bit later.

While the staff at the elections office were very helpful and despite our efforts to let them know we were coming a week in advance;  the people who were working were very confused about the role of the helper and they all did something different.

It took 55 minutes to vote and its great so many people are voting and hope it keeps up. Overall it was a very good experience and it was fun to go as a group to support one another and make a day of it.

"When we all vote, everybody wins"
-Ana Hopefener, Calgary Ability Network

Not all Hall members were ready to vote on October 8th. Some people wanted to know more. On October 17th, we learned what the parties had to say about ending poverty. The event is called “We Vote” and was held at the Knox Presbyterian Church on October 17th from 10-1. People showed up and had discussions about affordable housing, truth and reconciliation. There was also a mock vote on poverty, an ID clinic and help to register to vote. More photos can also be seen on Poverty Talks facebook group here and visit Action Hall on Twitter to see what was said about affordable housing.

Many people really liked the political parties spreadsheet. If you would like to know what the parties say about ending poverty, download this spreadsheet.

Thanks to all the community organizers for an amazing event!   Good Luck Canada! 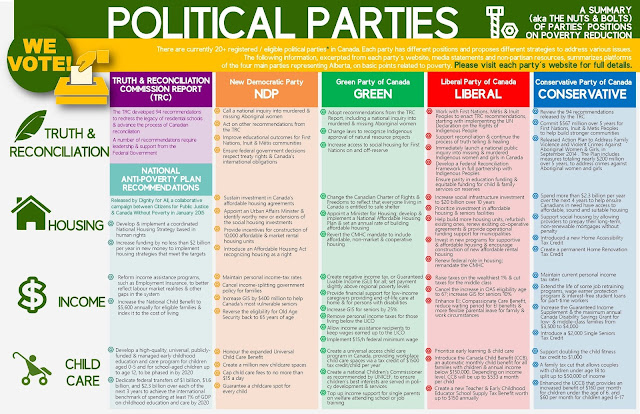 at October 19, 2015
Email ThisBlogThis!Share to TwitterShare to FacebookShare to Pinterest